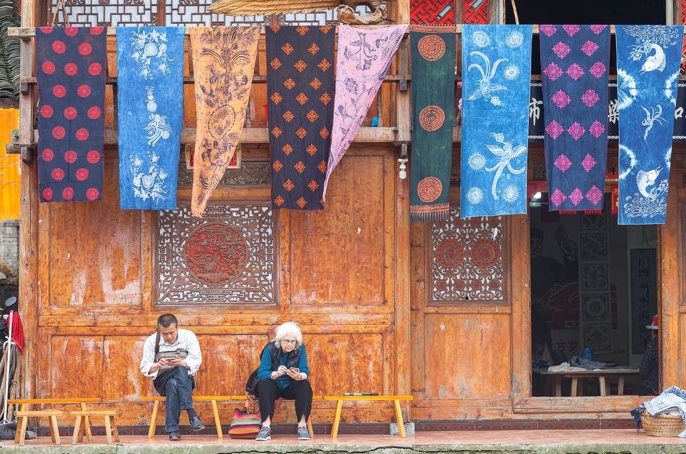 It was a chance encounter, my first meeting with Wang Jun. Joe Coca and I were in Guizhou Province, China, with a potential author, checking the area out for a couple of weeks. Wang Jun was our translator. That book didn’t work out, but in the course of our travels, we became enchanted with the province, its people, its history and culture, its textiles. I wanted to go back! I wanted to spend time in the villages talking to artisans. I wanted to understand how their lives had allowed for the preservation of the astonishing skills they practiced. But I was an ignorant “big nose” (what they call Americans) with no language, no connections.

Except for Wang Jun. Or Jun, as he invited us to call him. Here was a man who had studied English at university, who had entered the travel industry so he could meet people from all over and see the world. While he is of the majority Han ethnic group, he had great relationships and friendships among the Miao, Shue, and other ethnic minorities that populate Guizhou. He had deep knowledge of the textiles of the region. He had caught the passion.

The moment I understood this was when we walked into a batik (laran) workshop near Sendu. There was a traditional jacket hanging on the wall—very striking, but so was everything else— and Jun went completely nuts over it. He needed that jacket. He bargained, begged, cajoled, and eventually made a deal. Anyone who responds so personally, viscerally, to an old jacket and understands so much about it is someone who could help compile a book. Skipping forward, it took us about 15 minutes to come to an understanding and agreement.

So Joe, Karen Brock, and I went back to Guizhou Province. Jun had contacted traditional artisans in a dozen villages, representing a range of techniques. He had arranged third-party translators where he felt his language skills wouldn’t suffice. He had devised agreements and appropriate payments with the artisans, and he led the interviews. He regaled us with stories, took us to meet his family in Guiyang, fed us a shocking amount of great, seriously spicy food. He introduced us to Zeng Li, a vibrant and deeply knowledgeable woman who has spent decades traveling the backroads of Guizhou Province, documenting and reflecting on the beauty and significance of Miao embroidery.

In the aftermath, Karen wrote the bulk of the actual text, consulting via WeChat with Jun along the way. Thanks to the two of them, Joe’s spectacular photographs, and the design magic of Susan Wasinger and Michael Signorella, we had a book! Actually, we had two books, because Zeng Li’s work became a companion volume in this boxed set. 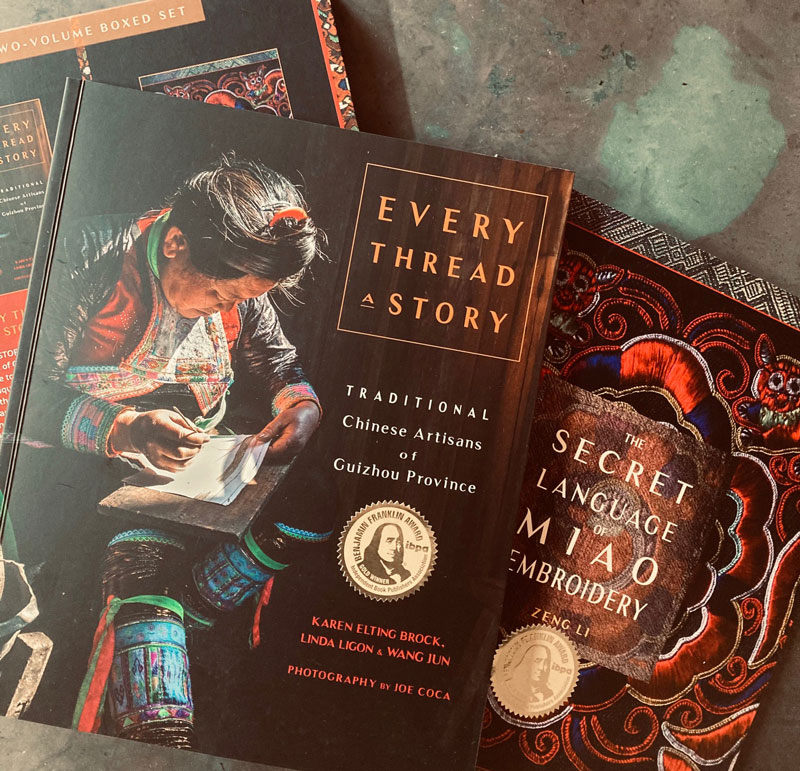 This all seems so long ago, in the time warp we’ve all been living in. What makes it newsworthy now is that these two books, Every Thread a Story and The Secret Language of Miao Embroidery, have been awarded the Gold Medal for multicultural books in the Independent Book Publishers’ Association’s annual Benjamin Franklin Awards. At the time they were created, the books sat at a crossroads of Chinese culture—where deep history and tradition met the speed train of modern progress. The award is an honor we all cherish, for the cultural boundaries we were able to cross, the changing world we were able to bear witness to.

7 thoughts on “A chance encounter that gave us a chance.”