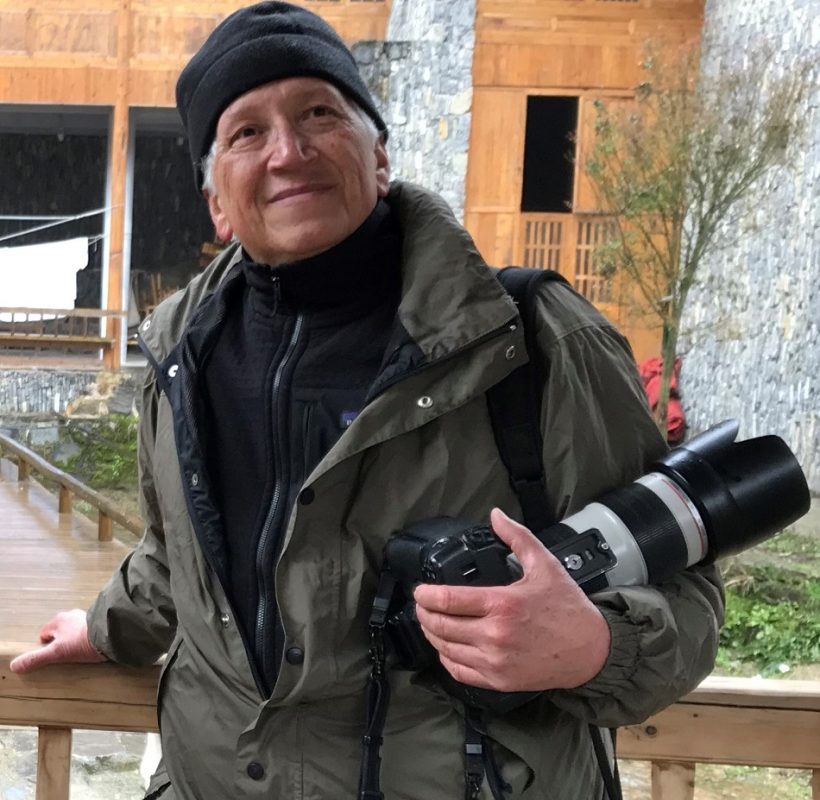 All of our books, despite variations in craft techniques and far flung locations, share common themes: endangered textile traditions, the life stories of indigenous artisans, and culture and place as context—those hands that shape craft and crafter.

The other common thread in our books is the remarkable photography of Joe Coca. Last fall, in celebration of Joe’s work, we published a collection of his photographs, The Human Thread a representation of nearly twenty years of his work and travel documenting textile traditions. But as publisher Linda Ligon writes in her foreword, “Joe captured so much more than just the cloth. The humanity behind the craft, the thread of humanity stretching through time and around the globe—that, to me, is the real story.”

“Every culture that I have had the opportunity to photograph has left me in a state of wonderment.” —Joe Coca

This was another chance shot that only happened because of fortuitous miscommunication. We had stopped to visit a weaver in Chinchero, Peru. Chinchero sits at over 12,000 feet, and the house of the woman we were visiting was higher yet. The only way to reach her house was by a narrow footpath. We were going only to look at her textiles, not to take any pictures. I told our van driver the plan, but with my sketchy Spanish, he misunderstood what I meant.

As our visit was ending and we were preparing to head back down the trail, our van driver suddenly appeared with all my equipment. He’d loaded it on his back and had trudged all the way up the footpath, thinking that’s what I wanted. I felt terrible. I couldn’t tell him that I didn’t need the equipment. Just as I was trying to figure out how to get myself out of that embarrassing situation, this old woman, Clotilde Aucacusi, stepped out of her house and sat down in her doorway. I looked at the scene and thought the gods had just blessed me. I had all the right equipment at my feet, and we went to work. I still love that van driver.

In Chiapas, the southernmost state of Mexico, we traveled with author Chip Morris while working on Maya Threads—a book about the changing fashions of the indigenous women in Chiapas. In the village of Sibaca, we came across a group of women who were wearing beautiful embroidered blouses. At first it appeared they were all laughing and gesturing wildly with a lot of hand waving. It turned out to be a group of four or five sisters, and all but one was deaf. The hand waving was actually conversation in sign language. The one sister who could hear explained everything to us about her family. As she spoke to us, one of her sisters would interrupt and a round of signing would ensue. The sister who could hear then translated to Chip in Tzotzil, who then translated to us in English. We learned much about the lives of the sisters through these layers of translation. This is Carmen, one of the deaf sisters.

While traveling in Morocco, one of the few words I learned to say in Arabic was “Stop!” I would usually yell at our driver to stop every time I saw a photograph I wanted to take. We’d been working in the village of Ben Smim and were on our way back to the hotel after an exhausting day. The sun was almost setting as we drove into the valley below Ben Smim. “Wekef!” I yelled, and the driver brought the car to an abrupt halt. I bolted out and captured this herd of sheep with their shepherd, dusted by light. No matter how tired you are, when the light shines, you cannot say no.

Learn more about Joe Coca’s life and work, his inspiration, and some of his favorite photographs in this fun interview with publisher and long-time friend, Thrums Publisher Linda Ligon.