When I was growing up in Oklahoma in the 1950s, I had a music teacher, Miss Sadlo, whose father had emigrated from Czechoslovakia early in the century. She had grown up in the nearby little town of Prague (which we Okies pronounced “Prayg”), founded and largely populated by her fellow countrymen from Bohemia.

Miss Sadlo spent an untoward amount of time teaching us nine-year-olds Czech folk songs and dances in lieu of the American folk songs that comprised the proper curriculum. We would dance around singing “Grandmother’s Goat Kid” while she wiped away a tear. And every May, she would encourage us to have our parents drive us the 25 miles to Prague to witness its annual Kolache Festival. It was all-day dancing in the streets and gorging on sweet, sticky kolache buns, but what I remember best are the clothes.

The folk wear of Bohemia, like that of much of Central and Eastern Europe, is rich with embroidery. Swirling red or black skirts with wide floral bands, colorful vests over full-sleeved, lacy blouses, head wreaths with flowing ribbon streamers—these clothes were made for dancing. And seeing Miss Sadlo—that glum, lonely, misplaced spinster— in her Bohemian finery smiling broadly and dancing in the streets was a revelation. Sixty-some years later, the Kolache Festival goes on in all its costumed splendor.

Los Angeles has the largest population of immigrants from Oaxaca of any place in the world. Neighborhood enclaves attract people from every region of the state, every language group (but mostly Zapotec). And just as in the Old Country, Los Angeles Oaxaqueñas celebrate their native culture with vigor and pride. They don the clothes, play the music, dance with abandon on special occasions.

These kinds of ex-pat celebrations—the Kolache Festival, the California Oaxacan Guelaguetza—are wonderful for giving outsiders a peek into an unfamiliar culture, and insiders a rush of nostalgia for their cultural roots.  But we have something better to show you.

Eric Mindling has spent nearly half his life in Oaxaca, and the past two years traveling deep into the countryside—the mountains and valleys and plains and coasts—to create a record of traditional life as it still exists today, as expressed in the clothes some people still wear. 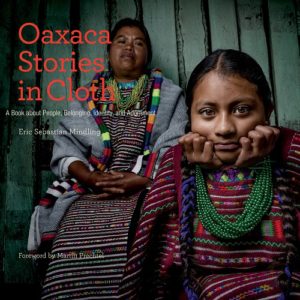 The images he has created for Oaxaca Stories in Cloth are not about dressing up for a special occasion. They are about deeply traditional people displaying the roots of their culture every single day.  Eric predicts, maybe optimistically, that these habits of daily fashion will have disappeared within a decade. For sure, within a generation. The work he has done to capture and preserve this vanishing way of living is priceless. His book is not. It’s a bargain.

Oaxaca Stories in Cloth is available at ClothRoads, Amazon, and at your favorite bookshop.