Can you make out the faces in this blurry old photo? I took it in the unlit interior of a headman’s one-room dwelling in a small Andean village about twenty-five years ago. They’re the skulls of his grandfathers, and his great-grandfather. He keeps them on a prominent shelf in his little hut, along with fresh flowers and a candle. In another corner, a shelf holds the skulls of the aunties, the grandmas. They’re arranged to face each other so they can chat and gossip; each wears a colorful scarf. All the ancestors are smiling: it’s their nature. 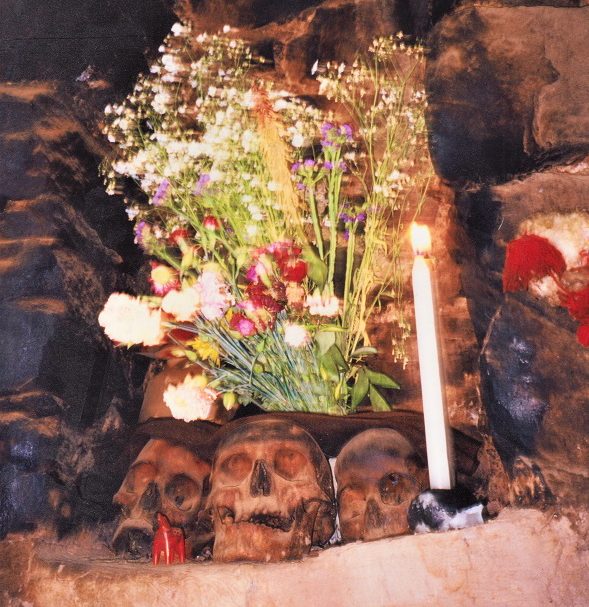 I wonder if this “smiling on the inside” quality of our human skulls is what makes Day of the Dead and other similar celebrations so festive in so many parts of the world. I’ve had the great good luck of turning up at the right time in Bolivia, Mexico, and rural China. There are feasts, family picnics, and fireworks; the dogs bark, the roosters crow, the children scamper among the grave markers. In the U.S., our springtime Memorial Day or Decoration Day observances are seriously morose by comparison.

We have, however, embraced the spirit of Dia de los Muertos (and its adjunct, Hallowe’en) just for the fun of it. More and more, non-Hispanic adults in our culture don costumes, make sugar skulls, and party hard, just because they can. I’ve seen shops wholly devoted to skeleton motifs, which tend to be amusing or ironic, not scary and sad.

Nobody, though, celebrates that no-man’s-land between the living and the dead as the Maya do. One of my favorite passages from Carol Karasik’s Maya Gods and Monsters is this party scene from the story of the Water Lily Jaguar:

“. . . the Lords of Death are beating their turtle shell drums and pounding their feet. They’re shuffling and stumbling and tottering in circles, banging and crashing and crushing each other’s toes. . . . And now they’re coming out of the woodwork. The knife bats and fish flies and two-headed geeks. The footless birds and spiny worms are delighted there’s a party. The crabs and the lizards are waltzing up a storm. The music is getting louder now because the anteaters are blowing their trumpets. And who’s that hairy frog tooting on his horn?
And who’s that coming here and steaming up the room? Why it’s the Sun, Our Father, dancing with Grandmother Moon! And isn’t that Venus leading the snake dance with the lightning-footed god of storms? And isn’t that the Night Wind doing the one-step all alone?
The dance floor is thundering with hoof beats and claws. The air is reeling with glass wings, dog stinks, and buzzing antennae. Things get out of hand when Water Lily Jaguar dances, and the dead start jumping for joy.” 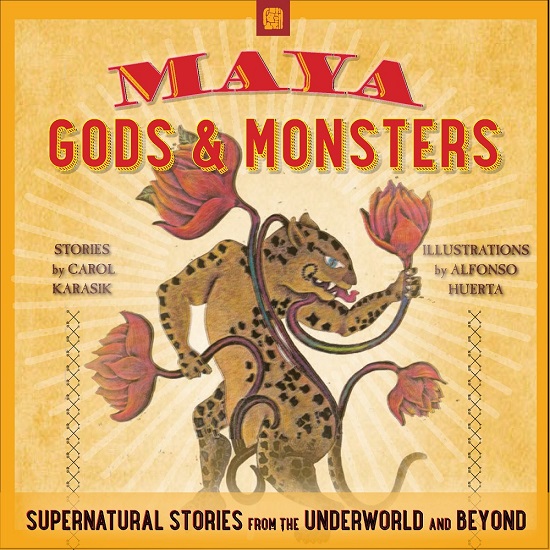 Celebrate Day of the Dead with those wacky characters from Maya Gods & Monsters.  Available at ClothRoads, Amazon, Barnes & Noble, and at your local bookshop.

3 thoughts on “When the Dead Jump for Joy”