Go Dog, Go by P.D. Eastman was a strong favorite for bedtime reading in my family a generation back (that is, when my kids were little). The girl dog and boy dog keep crossing paths, and she always asks, “Do you like my hat?” And he always answers (except at the very end), “No, I do not like that hat!” We would crack up over that line every time. So rude and unexpected, even after you’ve heard it a few hundred times.

What people put on their heads has been a very big deal throughout history.  Hats are protection, identification, fashion, and more. Think of the hijab today, so weighed down with meaning and emotional baggage. I wore one in the 1960s, and so did Jackie Kennedy. We called them scarves, and they were to protect our poofy hairdos. Now a woman can be beaten or jailed for wearing that simple bit of headwear in the wrong place or at the wrong time.

Look at the mantas that Maya women of Nebaj wear on their heads during Semana Santa. They make a strong statement of shared faith and humility. Look at the black ski masks worn by Maya women of Chiapas during the Zapatista uprising. They served both to protect and intimidate, and to put one on was a true act of courage.

Look at the hats worn by women throughout the Peruvian highlands! So many showy styles! Ostensibly for protection from the sun, they also signal shared identity, and rarely come off, even indoors.

I’m not much of one for hats myself, but I did wear one recently for the Women’s March in Washington, DC. It was a gift from my daughter, who wore one as well. My first thought was that it was a bit silly, not in line with the gravity of the occasion. But joining with tens of thousands of others with equally silly pink hats on their heads, I was overwhelmed by the solidarity they implied.  Not so silly after all. 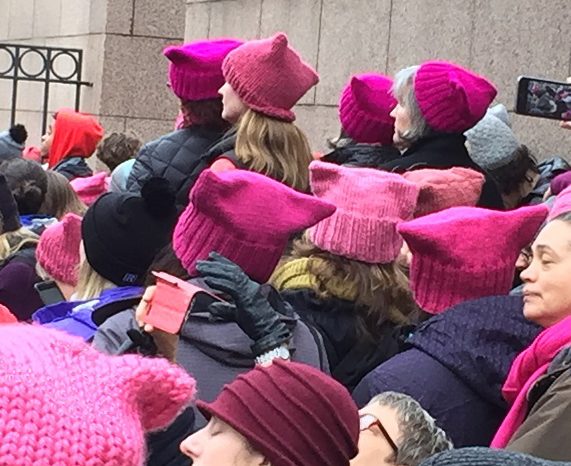