“Fadma Wadal is a feisty old woman—my favorite kind—and a great storyteller,” writes Susan Schaefer Davis, introducing the first of many artisans in her new book Women Artisans of Morocco: Their Stories, Their Lives. She goes on to tell the story of Fadma who remembers spinning with wool stolen from the underbellies of sheep that she hid under a gravestone and weaving with a loom fashioned out of sticks. Married at twelve, a mother at sixteen, a camel herder, traveler, breadwinner, she has much to say about the life of a woman and weaver surviving at the edge of the desert near the Atlas Mountains of Morocco.

I’m smitten with Fadma, for sure, but her story of resilience and innovation, of calling on craft traditions for survival, and her feistiness is one shared by dozens of women in the pages of our books. As the celebration of Women’s History Month, draw’s to a close, I wanted to highlight a handful of the remarkable women we’ve met in the history of Thrums Books.

In Faces of Tradition: Weaving Elders of the Andes, you will meet Aurelia Huallpayunca. She has lived alone for most of her life. She was widowed at an early age and her only child, a daughter, died, so she’s had to struggle to manage her fields and animals. A tough life, but weaving has helped to sustain her and has always been important to her.

Silk Weavers of Hill Tribe Laos introduces you to Sukkhavit, who as a teenager in war-torn Laos, lived in lean-to shelters in the jungle, digging tunnels to hide in when bombs fell. But she kept on weaving, even in wartime, using tree trunks to hold the warp tension on a makeshift loom. Her energy and love for weaving propelled her to the front of the craft, art, and business that re-emerged in Laos after half a century of war and isolation.

In Traditional Weavers of Guatemala: Their Stories, Their Lives, you will learn the story of Susana López. Believing in herself as a valuable and capable woman, Susana raised her five children on her own, by weaving. “I am happy because a woman has to have worth and be recognized,” she says. She has built a life on that belief.

In the pages of Embroidering within Boundaries: Afghan Women Creating a Future, you will meet many extraordinary women redefining their lives, and you will come to know the coauthor of the book, Rangina Hamidi. Rangina emigrated with her family from Soviet-controlled Afghanistan to the United States as a young girl. As an adult she has chosen to work in empowering women in her home country. As founder and president of Kandahar Treasure, the only women-owned enterprise in Afghanistan, she is a leading voice for women. Rangina’s feistiness is tempered by tremendous grace that inspires and humbles me.

Feisty, funny, brilliant, resilient. These are not only the qualities of the women featured in our books, they describe our authors as well, and most especially, our beloved publisher Linda Ligon who makes it all possible.
—Karen

THRUMS BOOKS, celebrating women around the world, their stories, and the work of their hands.
Available at ClothRoads, Amazon, Barnes and Noble, and your favorite local bookstore. 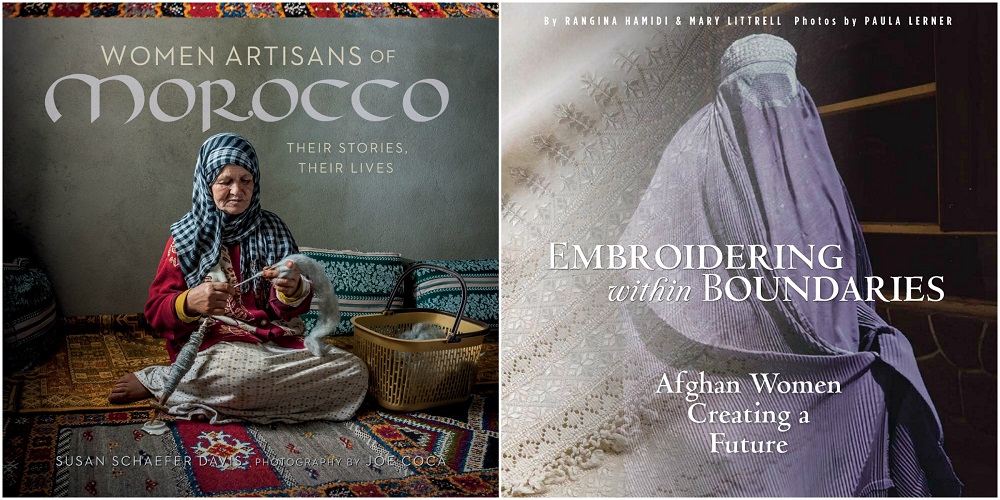