The dragon boats are racing in China this weekend; they’re racing all over the world, actually. The annual Dragon Boat Festival, or Duanwu Festival, is one of the most important traditional celebrations in China, begun about 2,000 years ago to honor the death of poet, Qu Yuan—at least that’s one of the stories. UNESCO added the Duanwu Festival to its Intangible Cultural Heritage list in 2009. 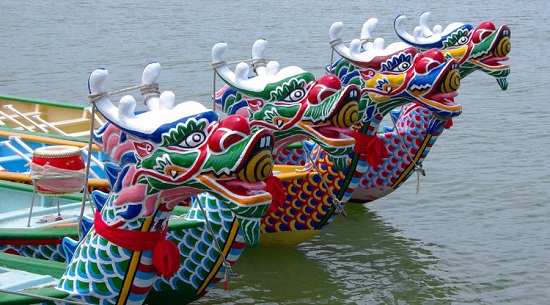 As with many traditional festivals, there are special dances and food; there is the drinking of special wine; and, of course, there is special cloth and thread and associated rituals.

Wearing perfumed pouches, according to the folklore, protects children from evil. So during the Dragon Boat Festival, children wear scented sachets, like a kind of ornament, on the front of their dresses or shirts. The fragrant herbs are wrapped in silk cloth and sometimes embroidered with intricate patterns. Multicolored silk threads are attached to the sachet as tassels.

Another custom is to tie five-colored silk thread to children’s wrists, ankles, and around their necks. Five-colored threads are believed to have magical and healing properties so they’ll protect children from plague and diseases. Children aren’t allowed to speak while their parents are tying the thread to them. Only after the first summer rainfall can children remove the thread and throw it into the river to complete the ritual.

What a splendid idea. But why threads of five colors? What’s the significance there? Let us know, if you know. And what other traditional cultural festivals have fiber-related activities that we should know about? Let us know your favorites.