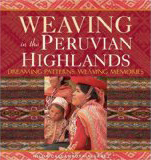 Sometimes, books just happen. The very first Thrums book, published in 2007, came about it that unexpected way. I had been on a tour to Cusco to visit the weaving villages of the Center for Traditional Textiles of Cusco, director Nilda Callañaupa mentioned her interest in publishing a series of books on the textile designs of the nine villages served by the Center.

This got my attention, because the textiles were fascinating and largely undocumented. However, how many people would buy such a thing? It sounded pretty specialized. So I suggested that instead, it might be a good idea to publish a book of general interest on weaving and knitting throughout the highlands. Almost any tourist or textile enthusiast would be glad to have such a book, and the sales could fund more books later on.

So within a matter of months, Nilda had produced a manuscript in Spanish, and I was off to Cusco to help take it to the next steps toward becoming an actual book.  Much of the challenge had to do with language. Nilda’s first language is Quechua, her second, Spanish, her third, English. I am more or less illiterate in anything but English. So what are these “polleras” mentioned in the text? One dictionary translated it as “chicken sacks.” No, actually, that’s the name for the voluminous skirts that Quechua women wear. And what is the meaning of “ley pallay”? There’s really no clear English equivalent. And so it went.

Nilda had a rich archive of photos taken over the years by various friends and volunteers, but she was determined to give a truly broad presentation of the variety of clothing worn by people in various communities. So there were late evenings with her friend and supporter Paula Trevisan perched on a chair, shooting down on an array of different hats, or mantas, or ponchos.

To make a long story short, Weaving in the Peruvian Highlands: Dreaming Patterns, Weaving Memories  was off press about a year after Nilda and I had our initial conversation. It’s been through several printings, including a Spanish edition, but largely unavailable in the U.S. for the past many months. Our sister company, ClothRoads, has a small inventory, and more are on their way from the printer now. And that series of books about the village patterns? The first one, Textile Traditions of Chinchero: A Living Heritage was published earlier this year. And I was wrong. It may be specialized, but it is deep and fascinating with historical and social insights that go far beyond textile design. I like how books beget books.