How can an Aretha Franklin impersonator, a mudslide in Guatemala, rug hooking, and a new book about forming a cooperative with Maya women in Guatemala possibly be all tied together? Author Mary Anne Wise tells us how in this amazing back story to her book Rug Money: How a Group of Maya Women Changed Their Life through Art and Innovation, co-authored with Cheryl Conway-Daly. Thanks for sharing the full story, Mary Anne.

It was 2005 and the occasion was the spring concert at my daughter’s high school, graduating class of 28 students. It’s a small town.  Everyone shows up for the spring concert. Never mind that your children graduated years ago—this event offers a chance to come together united in musical purpose. Farmers leave their tractors and their fields, the planting waits until tomorrow. Those who work in the City hurry home because they don’t want to miss this festive occasion. It’s an opportunity to meet your neighbors and chat with your former teachers and classmates.  The concerts are performed in the gymnasium–the school is too small a building for a dedicated auditorium—and you sit in the bleachers and you take in the spectacle.

The choir director, who is also the band director, performed the role of concert emcee, too. As the lights were dimmed, the crowd hushed to hear him speak. “Ladies and Gentlemen,” he boomed into the mic, “Please join me in welcoming our special guest: Miss Aretha Franklin!!!!”  Out from behind the risers, where the choir was positioned, stepped the principal’s son.  I’ll call him Jeff. His face was bronzed and he wore an Afro wig. He’d inserted two volleyballs under his “blouse” and 2 basketballs underneath the back of his “skirt.” The crowd roared with laughter and leapt to their feet, hands together in deafening applause. I kept my seat as Jeff, supported by the choir, belted out Aretha’s classic rendition of Otis Redding’s “Respect.”

Aretha Franklin has accompanied me throughout most of my life. She’s consoled me through a couple of broken hearts and periods of intense loneliness. She’s participated in joy filled reunions and she’s provided the back beat to countless dance parties. On these occasions I positively crave the healing sound of her soaring voice. She reaches within and strikes a subliminal chord and—just like that—I’m connected to the divine through the conduit of her vocal gift. That my daughter’s school condoned this racist skit was as indisputable as it was unacceptable. I needed to respond.

The next morning I phoned the school and made an appointment to speak with both principal and choir director.  I don’t remember what I said but I remember what I felt. I was angry and I was frustrated and I was supremely disappointed in their judgment. I kept repeating: “What were you thinking?”  I recall only a vague sense of their contriteness. In my memory of that meeting, their alarm at my over-the-top emotion is what registers most.

Driving home one thought looped through my mind: “I must show my daughter a bigger world. I must do it now.” As that thought hardened in to fact, my next thought was: “Jody (a good friend who has volunteered with Farmer to Farmer, a small nonprofit in Guatemala for over 20 years) is probably going back to Guatemala soon. We’ll accompany her. That’s the start of an antidote to combat the bigotry at Phoebe’s school.”

And that’s what happened. A group of old friends, and Phoebe, my daughter, and I all accompanied Jody to Guatemala. I envisioned Phoebe returning home with a world of wider possibilities now stretching before her. In fact, she would grow up to become an intrepid traveler. Today, her friends comprise a diverse spectrum across racial, religious, social, and political ideals.

I envisioned collecting textiles on that trip, and I knew I these pieces would enrich my studio practice. But something additional occurred. This trip would launch me on a new path. I didn’t know it then, but I would not return to my studio.

Instead, towards the end of our trip we learned about a mudslide in Panabaj, a town where, just a few months earlier, many of Jody’s Tzutijil friends had lost relatives and friends.They wanted us to bear witness to this tragedy and see where the survivors were now living in an overcrowded “camp.” After touring the heart-breaking site, and before leaving the country, Jody and I pledged to help the survivors.

The “help” took the form of a trunk show fundraiser. We collected traje (traditional clothing) and we sold it at an event in Minneapolis. It was supposed to be one trunk show sale but the first sale spawned a second sale and finally, a third sale in as many years. The last trunk show fundraiser was held in Denver in 2009—where I would meet Thrums Books publisher Linda Ligon, never dreaming I would work on a book with her one day.

As we headed to Guatemala for the third and final collecting trip, we organized the in-country travel schedule around two events: We were going to teach a weekend-long rug hooking class. By now we had met many fair trade craft production groups. We understood they were continually seeking to expand their repertoire to remain competitive in the global market place. Rug hooking, we reasoned, could fit this need.

We also planned the in-country travel schedule to be in close proximity to a city on January 20th, 2009. We wanted to be close to a city—and cable television—because Barack Obama had just been elected the 44th president of the United States. Jody and I never thought we’d live to see a black man elected President—and we wanted to witness history.

We chose Panajachel and arrived at a cantina full of gringos just as the ceremonies were getting under way. Having been on the road for nearly two weeks, we were unaware of the line-up of speakers and others who would share the dais. The camera panned the stage. No, my eyes were not fooling me: there sat Aretha Franklin just a few feet from the President-elect.

Now making her way to the microphone and wearing that hat, the hat that was later gifted to the Smithsonian Institution, the orchestra picked up the tempo. Aretha raised her arms, lifted her voice and rejoiced:  “My country ’tis of thee, sweet land of liberty, of thee I sing . . . ”

Rug Money: How a Group of Maya Women Changed Their Lives through Art and Innovation is available now. 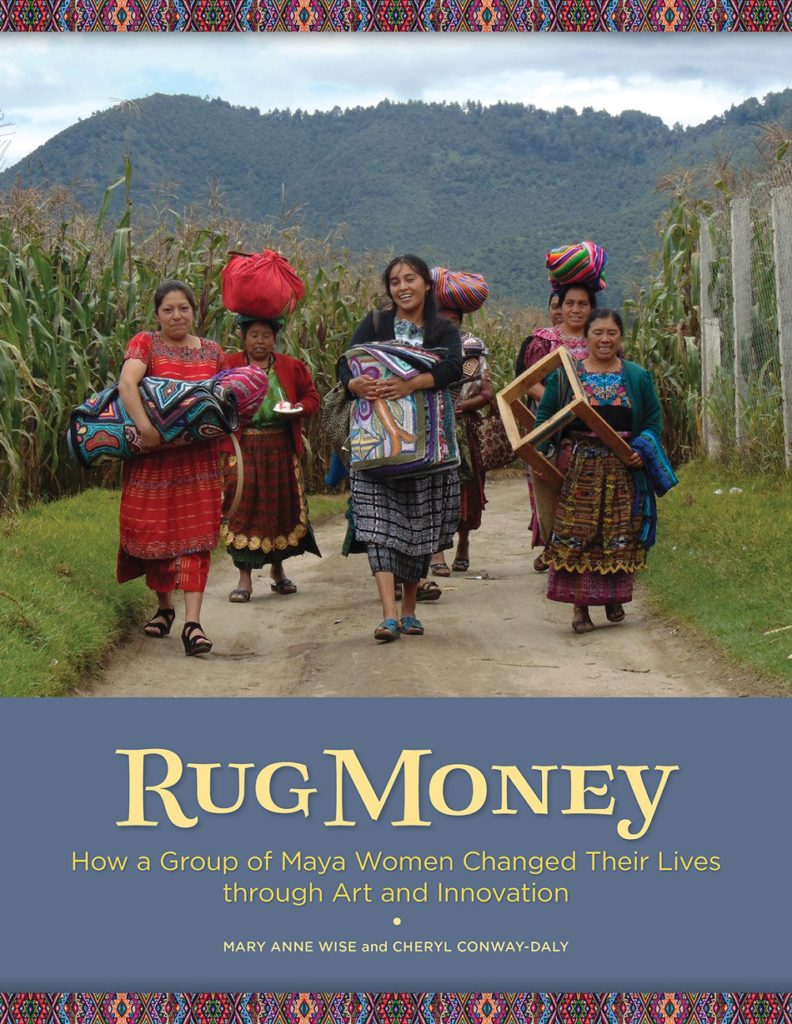