Sometimes you just have to laugh. Sometimes you leave all thoughts of “political correctness,” of propriety, of good manners behind and just let it bubble up. Laughter is universal. People laugh at themselves, their foibles, each other, their fate, the universe.

Take this traditional Quechua riddle recorded in Weaving in the Peruvian Highlands: Dreaming Patterns, Weaving Memories.
Q:What has a hole that all men desire? (Pause . . . )
A: A poncho. Or this one.
Q: What gets pregnant alone, turning and turning?
A: A spindle.

Quechua humor can be a bit raunchy. I remember being in the village of Pitumarca with Chris Franquemont several years ago. It was a festival day, and a special feature was an “insult”contest. A couple would get up on the platform and begin hurling zingers at each other: “Your [private body part] is so ugly. . . .” The winner, as I recall, and as translated to us with many giggles, was, “Your *** is so ugly, it looks like a water hose that is all tangled up.” Ouch!

Guatemalan humor often has a sharp interracial edge to it, but Deborah Chandler, co-author of Traditional Weavers of Guatemala, shares this one that any woman in the world could laugh at: “Finding a good man is like hunting for a good avocado—you never know what you’ve got until you get it home and open it up.”

Laugh and the World Laughs with You

I grew up in Oklahoma and had many Native American friends. I called them Indians (and they called themselves Indians, or Indins, so please don’t take offense). As a race, their jokes are a pungent mix of self-deprecation, astute observation, and irony. Take these examples I found online, so much in the vein of the jokes I overheard in my high school in the Seminole Nation:
If Santa were an Indin, his new moccasins would be made out of Dasher. Or: if Santa were an Indin, he would be able to navigate his sleigh by pointing his lips. Or: If Santa were an Indin, all his elves would be Hopis from Second Mesa.
That last one is an inter-tribal in-joke, like this one:
Q: If a Chickasaw man marries a woman who is half Potawatomi and half Hualapai, what do you call their kids?
A: Chicken Pot Pie.

One of the most desperate places I’ve ever visited is Kandahar, Afghanistan, a place at the heart of a book we’ll be publishing next fall, Women of Afghanistan: Reviving an Embroidery Tradition. For all the destruction and fear and uncertainty I saw, the people themselves, the women I met, are like rays of light: courageous, optimistic, creative.

I didn’t hear a lot of joking around (except when everyone teased the cook about her unorthodox headwear), but author Rangina Hamidi speaks of the tradition of landays—twenty-two syllable songs in which Afghan women speak their feelings. They often have the bite, the satire that live right next door to humor:

You wound a thick turban around your bald head
to hide your age. Why, you’re nearly dead!

But to end on a lighter note. I’ve never witnessed as much shared laughter as in Laos last spring, visiting there with Maren Beck and Josh Hirschstein, authors of upcoming Silk Weavers of Hill Tribe Laos. 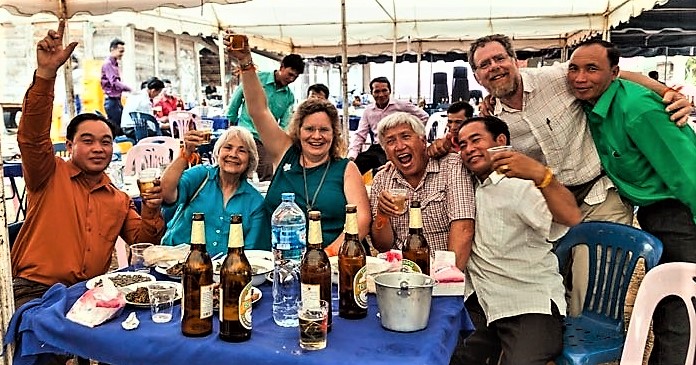 Lacking any common language whatsoever, I was nevertheless pulled into the hilarity that seemed to accompany almost any occasion, whether it was a round of toasts, a wedding celebration, a drinking game, or a family dinner. I learned that Lao who are active on FaceBook (and they are legion) often insert a “5 5 5” where we might say “lol” or even “lmao.” Why? The number 5 in Lao is “ha.” And so, my friends, 5 5 5.

4 thoughts on “Laughing it Off”