Chip Morris has lived in the Chiapas Highlands for most of the past forty years. The climate is cool to cold (except when it’s somewhat hot), the altitude a bit of a challenge at 8000 ft. This is his home. He has learned the Tzotzil language, he’s known in the villages as a friend and supporter; his observant eye tracks the subtlest changes in textile production and costume styles. From this vantage point, Chip has written extensively: Living Maya and Handmade Money are just two important contributions to the literature of Chiapas textile knowledge, along with Guide to the Textiles of the Chiapas Highlands published by Thrums Books in 2011, and now his newly released work, Maya Threads: A Woven History of Chiapas, co-authored with Carol Karasik.

So where does he go to write? Not to his tranquil adobe home with its colorful garden on a quiet side street in San Cristóbal; not to Na Bolom, the museum/study center just down the block. He goes to the jungle.

Now, the jungle in Chiapas is another world. Chip’s writing location of choice, Palenque, is a tough, winding, five-hour trip from San Cristóbal. Daytime temperatures run in the 90s, as does the humidity. Towering ceiba trees, vines as thick as your wrist, palm trees, howler monkeys bellowing and screeching morning and night, frogs, giant spiders, cicadas—it’s a rich cacophony of steamy green life.

In the corner of an outdoor restaurant at a small hotel in the muggy forest he sits at his computer, pushing ideas and images around until they take vivid and intricate shape. You can see samples of his working mode on his Facebook page where he posts photo montages with explanatory notes. 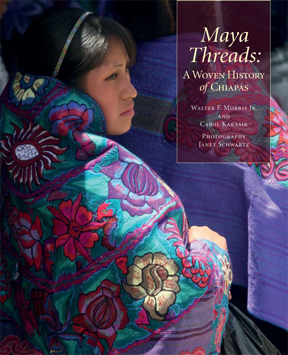 Maya Threads is Chip’s deep exploration of Maya culture and costume as it’s expressed in the ever-evolving, colorful handcrafted dress of the Maya people. You’ll want to get your hands on this book. It’s a must-have for anyone with an interest in indigenous textiles and the people and cultures that produce them—not to mention anyone with a notion of visiting this forgotten butt-end of Mexico.

But wait—that’s not all. It’s probably no coincidence that Chip’s co-author, Carol Karasik, lives in Palenque as well. An author in her own right (not to mention paleoastronomer and super tour guide), Carol has published a novel set in the same small hotel in the muggy forest noted above. “American archaeologists, besieged Indians, and dysfunctional hotel owners clash with spiritual seekers while awaiting the apocalypse,” the descriptive copy says. It’s a good read. You can find The Drum Wars: A Modern Maya Story on Amazon.

One thought on “Mayans, Textiles, and Chip Morris”