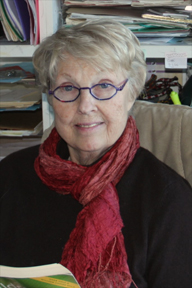 You’ve read my natterings about the publishing side of making a book. Here’s the point of view and the journey of the person with whom it all starts: the author.

For the last year and a half, my family and friends have a habit of asking, “How is your book coming?” These questioners became patient voyagers within the world of my vocabulary: Incas, Peru, archaeology, rituals, beliefs, Pacha Mama, Father Mountain Apu, on and on.

I responded to their curiosity by occasionally sharing a story from my soon-to-appear book, Beyond the Stones of Machu Picchu: Folk Tales and Stories of Inca Life. My Llama, Fox, and Condor shows have found welcome listeners, especially here on vacation at this remote mountain lake in western Maine. After dinner and busy days of hikes or water play, we have sometimes remained at table and let the candles flicker, allowing for my occasional read-alouds to become evening entertainment. I want my stories to be family or schoolroom read-alouds. Inca traditions are transferred orally or incorporated into weavings. Reading aloud seems quite in keeping with that way of life.

I feel lucky. We inevitably end up discussing the levels of meaning in folk tales, a favorite topic of mine these days. Must folk tales remain static — or do I have a right to use the treasures to reveal as much as I can about a complex and ever-intriguing culture? Does an Inca tale like “The Gift of Quinoa” present a classic ne’er-do- well who in death leaves a double-sided legacy? Does “The Bear Prince” reflect the particular culture of the Andes or let us glimpse again the shame of most cultures — prejudice and fear of The Other? On the other hand Bear, as in our familiar folk tales, appears on stage to warn the young to avoid the danger of blind passion. Bear is also a cult figure in the Peruvian highlands.  When men dress in costume to represent Bear, the act endows the wearer with the essence of Bear, providing the sense of strength and power.

So many levels in folk tales. Such conundrums and many more have been eloquently discussed by Joseph Campbell and others. I dare not proceed further. But I yearn to give the readers of my re-told tales plenty of room for discovery and discussion. To provide glimpses of the culture, I have greatly expanded and developed those tales.

As to my own invented stories, unconsciously or consciously influenced by my love of South American magic realism, most have become dramatizations of the stages of growth and accompanying rituals practiced by Quechua people, descendants of the Inca, today.  At a time of change, what is the value of ritual and symbolic enactment like “The First Haircutting”? What are our rituals? I hope the reader can recognize life’s struggles in another culture and come closer to the people through their actions, their stories.

The folk tales in my book, as well as much background for my own invented stories, I learned from Angel Callañaupa Alvarez, by way of his evocative paintings. I met Angel some thirty years ago when his sister Nilda invited me to visit and stay overnight with her family in Chinchero. There I encountered the murals Angel had painted on the walls of their courtyard. I saw more of his painting on every surface available to him—from ceramic plates and pots to beautiful varnished wood constructions he called “Inca locks” on which he spread his stunning paintings and designs. 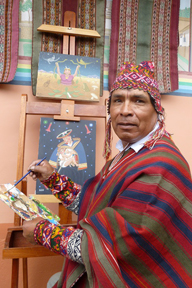 I began to collect Angel’s work in the mid to late 1990s. I was then starting to travel frequently to Peru, studying the great range of still-existent textiles and their relationships to peoples’ lives. How much I discovered, especially by watching and filling my notebooks with precious details of interchanges with Nilda and her extended family and friends.

But I realized there were many vital rituals, some rare and unknown, that I might never comprehend, or even experience. For this I turned to Angel.  Would he paint for me scenes of Qoyllu Riti, Star of the Snow, the three-day pilgrimage and ceremony held on top of a treacherous snow mountain? His pictures were stunning and gave me the foundation for my “Snow Mountain” story that I extended by talks with Nilda and others and by reading accounts of the late anthropologist Robert Randall. My story became a boy’s relationship with his father and his gradual discovering the meaning of the mysterious events he encountered high up and close to freezing where he hoped his own suffering might restore the health of his beloved grandfather.

My explorations went on for many years and led to a sharing of Nilda’s dream, to help preserve the Andean textile traditions that could be lost in just one generation. My passion led to talks and school presentations, to classes co-taught at the University of Vermont, of work with the U.V.M Fleming Museum. I wrote accounts. I wrote stories. I gave school presentations and read my stories to the children. And finally Thrums Books gave me the opportunity to pull together all the dramas and stories into one book Beyond the Stones of Machu Picchu: Folk Tales and Stories of Inca Life.

Publisher’s note: Beyond the Stones of Machu Picchu is on press and will be available in November. Watch for it at www.clothroads.com.