I can’t even remember how it happened. It was 2009. Mary Anne Wise, whom I’d never met, said, “Would you like to come to Guatemala with me?” She was going down on a buying trip to purchase textiles for a trunk show to benefit Friendship Bridge, a microlending organization. I may have expressed some interest in creating a catalog for the show. Or maybe I was just feeling some wanderlust. I know the clincher was that her trip would end in Guatemala City on Deborah Chandler’s 60th birthday, and a party was on order.

So let’s follow that thread backward. I’ve known Deborah Chandler for more than 40 years. She’s been a friend and primo author for all that time. She knew Mary Anne Wise. Mary Anne knew I was in publishing, and she wanted a catalog for her show. Maybe that’s how it went.

In any case, there I was in a van with Mary Anne, her sidekick Jody Slocum, and three women from Friendship Bridge. We were hitting all the little markets in the Guatemalan western highlands, scooping up textiles that would have good resale value in the U.S. These women were unrelenting. They would buy dozens of pieces every day, everything from aprons to huipils to tzutzes, and then work until midnight photographing and tagging each piece and entering them into an inventory spreadsheet. They did this work in the courtyard  of Ramelle Gonzalez, an American woman who runs an impressive scholarship program for Maya students, and who has collected some mind-blowing embroideries that memorialize the 36-year civil war in ways that would make you weep. But that’s another story.

A memorable moment for me was a stop in the village of Chajul. This area was among the hardest hit during the years of war, and far off the beaten path. I remember being grabbed by the throat by a woman who thought I wanted to kidnap her little boy. (I made the mistake of taking his picture.) The poverty was so deep that when women learned there were gringas in town buying textiles, some literally stripped off their huipils there in the street. The huipils were striking: strong solid-color backgrounds, bold motifs of double-headed eagles and other creatures. We hadn’t seen anything else like them. They were the art of desperation.

Eventually we ended up back in Guatemala City, and Deborah’s party was splendid. Mary Anne went on from there to teach a  workshop in rug hooking to Maya women in Panajachel. Rug hooking? I thought it was sort of kooky. These women were masterful weavers. Why teach them to hook rugs? Such was my lack of vision. The vision was all Mary Anne’s, and it was brilliant. You can read about it in her new book, Rug Money: How a Group of Maya Women Changed Their Lives through Art and Innovation. I still marvel at how that one lone workshop turned into a movement–the Multicolores rug-hooking cooperative–that has changed lives, empowered women, brought families out of poverty.

You just never know how one thing might lead to another.

Read more about the founding of Multicolores and the inkling to write a book about their story.

Rug Money: How a Group of Maya Women Changed Their Lives through Art and Innovation 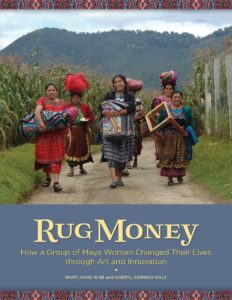 is available now at  ClothRoads and Cultural Cloth. You can pre-order it at Amazon, Barnes and Noble, and your favorite local bookseller.