I first met Chris Franquemont in 2005 when I went on a tour to weaving villages in the Peruvian Andes. Chris was one of our tour leaders, the quiet one. She made me pay attention, though—she knew so much! The landscape. The cloth. The plants. The customs. Her years of living in the village of Chichero with her late husband, Ed, raising her daughters there, becoming fully integrated into the community, gave her uncommon knowledge and insights—and remarkable true stories.

The tour was sponsored by Andean Textile Arts, the North American support group for the Center for Traditional Textiles of Cusco (CTTC). Chris and I had some discussion then about my starting a publishing program for CTTC. She was interested in natural dye plants; Nilda Callañaupa, the director of CTTC, was interested in documenting the traditional weaving patterns. I was interested in sharing a bit of the magic of Andean weaving with as many people as possible. So books started to happen. Weaving in the Peruvian Highlands: Dreaming Patterns, Weaving Memories came out in 2007, a Spanish-language version of same in 2009, and Textile Traditions of Chinchero: A Living Heritage in 2011, all authored by Nilda. 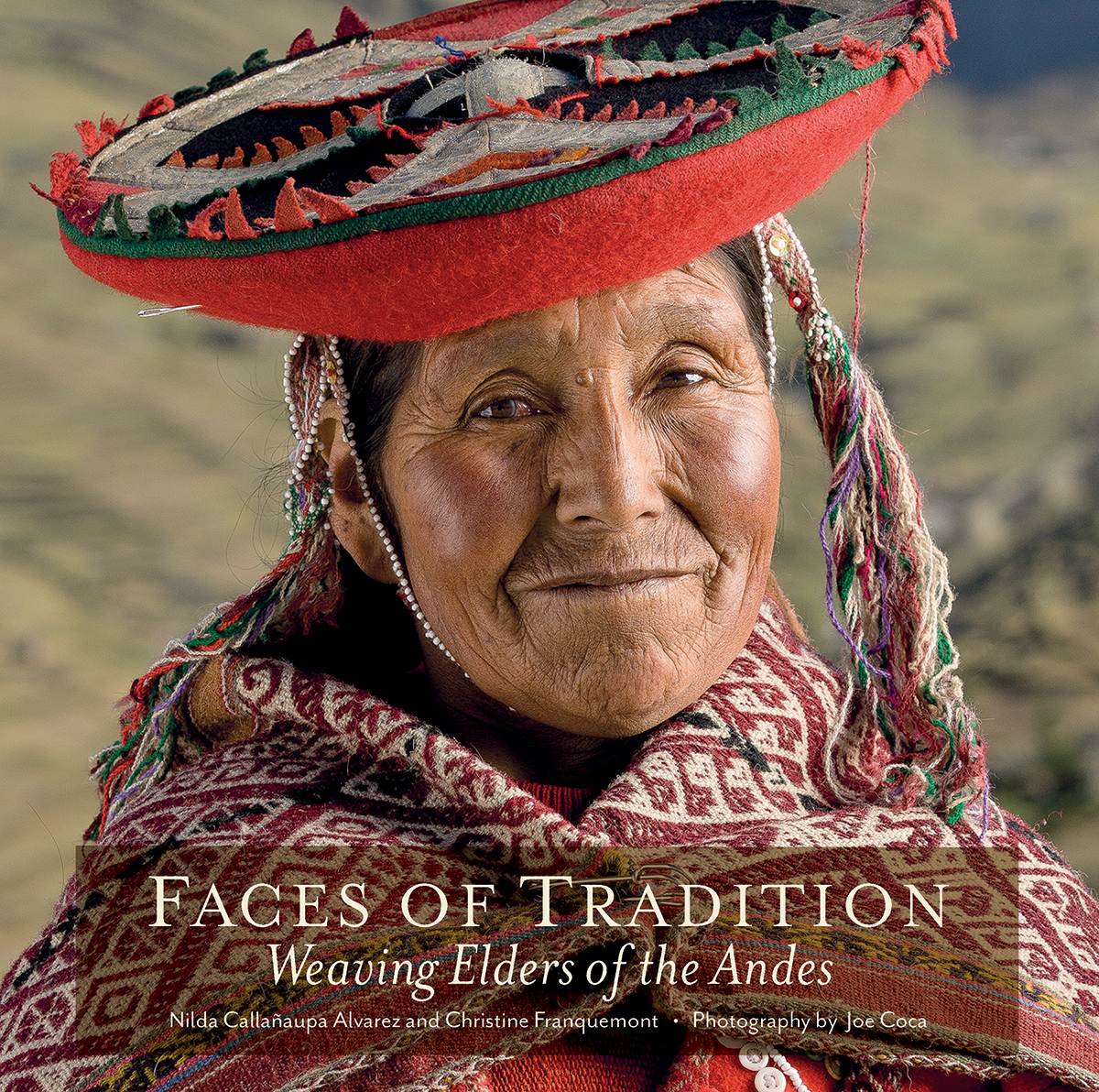 Faces of Tradition took a while. The idea for a co-authored volume was born in 2010, the massive photoshoot and recorded interviews happened in 2011, Nilda began writing in earnest in 2012, and Chris was still writing important sections in the weeks before we went to press in the summer of this year. It was a wonderful creative collaboration, one of the best I’ve ever experienced. We spent a couple of weeks in Cusco together in the summer of 2012, travelling to one of the villages (where we were introduced as Nilda’s sisters, a relationship I’d be happy to claim); we spent an afternoon in Chinchero, dining with Nilda’s family and visiting some of Chris’s old haunts; we just happened to run into an important community leader from Pitumarca, Timoteo Ccacchta, on the street in Cusco, which led to a lot of fascinating conversation and an unexpected personal profile in the book. We spent hours and hours poring over notes and photo proofs.  Much serendipity occurred during that time.

Whatever came from Chris’s pen (well, word processor actually) contained surprises. She was not given to stock observations or dry facts. She looked for the deeper meaning and the humanity in the lives and habits of the people we represented. And she had the scholar’s patience for combing over and over the pages, finding the glitches and inconsistencies that always happen, especially when you’re dealing with a language that doesn’t have precise spelling rules.

Faces of Tradition launched at a splendid party in Cusco last month. It took place at the Museo Machu Picchu Casa Concha during Tinkuy de Tejedores. Two full galleries were hung with Joe Coca’s stunning portraits, and the courtyard was filled with weavers, visitors, and the Elders we were there to honor. There was music, dancing, toasting, and book signing. Chris missed it by three days. She died unexpectedly in Cusco on November 11. She was honored with a candlelight vigil and burial among the people she had known and loved so well in Chinchero a week later. When events of great celebration and great sadness collide, you realize the weakness of words, but the strength of important relationships that transcend time. Faces of Tradition is an important piece of her large legacy.