Today begins our Thrums Books/ClothRoads Textile Arts Tour of Morocco with Susan Schaefer Davis, author of Women Artisans of Morocco. We’re about to board a flight for Casablanca, where we’ll meet Susan and several other textile travelers to visit many of the artisans featured in Susan’s book. I am so fortunate to have this opportunity to meet button maker and feminist, Amina Yabis and to maybe try my hand at making a button; to sit down with feisty Fadma Wadal in her home on the edge of the desert and be regaled by the stories of her life as a master weaver; and to wander the hills near Ben Smim where we’ll meet Fatima Fdil who can explain the rich weaving traditions from her village—from knotted rugs to flatweaves embellished with allover designs and sequins.

I’m especially looking forward to visiting the Berber village of N’kob where we’ll visit with weavers from the Timnay Weavers Association. An excerpt from Women Artisans of Morocco explains why:
“Aicha Seqqat is the president of the Timnay Association of weavers in N’kob, an indication of her respected status in the village and the excellence of her weaving. She is also a midwife and one of two leaders chosen by the village women.The weaver’s association meets at her home, and I stay there when I visit the village. My bed consists of a stack of her beautiful rugs on the floor. What could be more luxurious? I also like to stay with her because of her cheerful personality. It’s hard for me to reap the full benefit of her humor and intelligence since she speaks only Berber, but her youngest daughter, Ijja, helps translate into Arabic.

I saw a clear example of her leadership at a meeting of the weavers several years ago. The income they earned from Internet sales was given to husbands, and depending on their inclinations, the men gave a portion directly to the women or more often spent it on household expenses. The family profited, but the women never received any cash for themselves. How to convince the men to give the women money? It was Aicha who spoke up, saying, “We could tell the men that if they’d give us a little something when we finish a rug, we might make the next one faster.” Genius! Many women tried it, and it worked. . . .

Aicha has woven several styles of rugs: the black and white chedwi, the “picture,” the newer flatweave called terz, and women’s traditional cream capes. “I liked to make a different kind each time, so if one style doesn’t sell, the next one might.I wanted to see what women value in rugs, so I asked Aicha which of those she liked best and why. She likes the chedwi because it’s an old, traditional style. She also likes the women’s cape. She says it is beautiful first because it shows her craft, then because it’s large, and finally because of the intricate designs along the borders. It’s interesting that for Aicha, tradition comes before design.

Aicha begins a new rug by choosing the colors. “I do use natural dyes sometimes, but it’s difficult because it takes a long time. If you’re using indigo, it takes two days to get ready. To make a good blue, you also need henna leaves, dates, and coal. Then you see what other colors will go with it.” However, she doesn’t plan the overall layout of the rug. Nor does she plan the designs she will use before she starts weaving. “When the loom is ready, you just start with whatever comes into your mind. It comes to your mind as you’re weaving, little by little.” This master weaver works from inspiration.”

We’re in for a fabulous treat!

Join our journey by following us on FaceBook or Instagram, and in the pages of Women Artisans of Morocco: Their Stories, Their Lives. 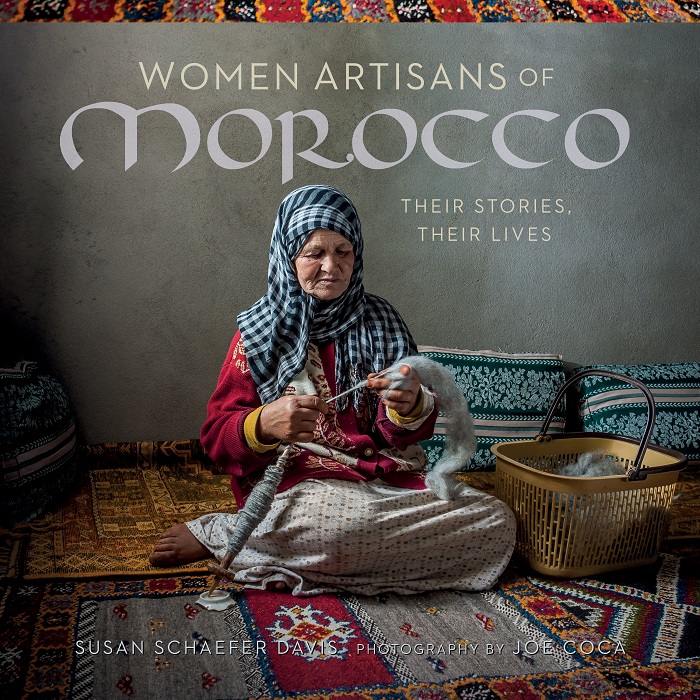 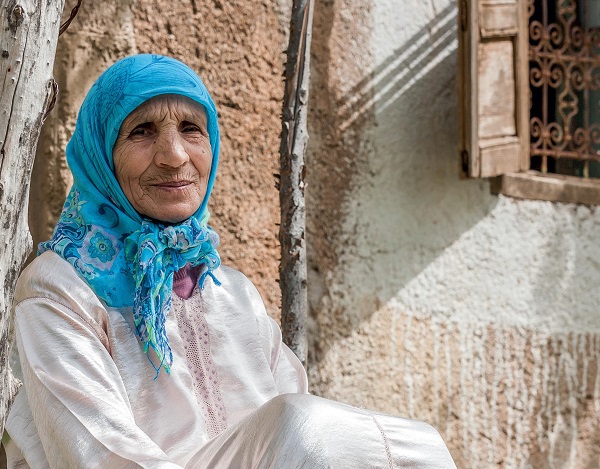 Women Artisans of Morocco: Their Stories, Their Lives