Keith Recker has worked with makers from more than sixty countries to refine their products, tell their stories, find new customers, and gain the recognition they so deeply deserve. He has gathered their stories in his highly acclaimed book True Colors: World Masters of Natural Dyes and Pigments. His book is at once an immersive visual experience and an inspiring travelogue of personal stories and practical information from more than two dozen artists who are leaving their mark on the world.
In this excerpt from True Colors, Keith explores the rich history of woad with dyer, weaver, and teacher Aviva Leigh who works extensively with Europe’s earliest blue dye.
—Karen Brock, associate publisher

Woad, a yellow-flowering member of the mustard family, has likely been part of humankind’s library of dyestuffs for millennia. Seeds and seed husks of Isatis tinctoria, dyer’s woad, have been discovered at several Stone Age excavation sites in France and Germany. Early Iron Age textiles found on the Sinai Peninsula show woad in use as far back as the thirteenth century BCE, which makes its later use in Egyptian court textiles no surprise.

A later Iron Age dig at Dragonby in the United Kingdom dates woad’s use in Britain to the first century BCE, around the time of Julius Caesar’s account of the Gallic Wars describes ancient Britons painting their bodies blue with it to frighten their enemies. The Iceni, ruled by Queen Boudicca, rose up against the Romans not long after Caesar’s death, and they were said to be painted fearsomely blue as they marched to Londonium and burned it down. 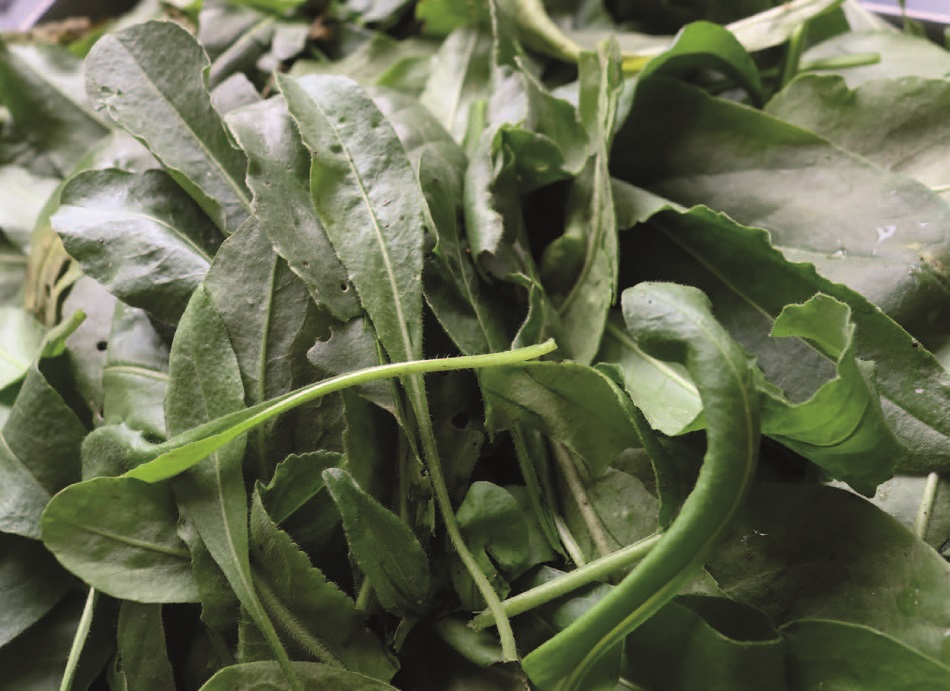 Had they been asked, those ancient Romano-British Celts would probably not have cited intimidation as the reason for their blue skin; to them, woad was foremost a form of protection. It can be dissolved in fat, and a rubdown of blue-tinted lard would, at least, help keep these famously naked warriors warm. Woad also has antibacterial and antiviral properties, which might have helped quell infections among the wounded. It’s also possible that specific designs drawn onto the skin with woad as a sort of temporary tattoo conveyed a sense of spiritual protection and communal belonging, helping to shore up confidence before a battle.

Woad itself is a botanical warrior, a tough biennial plant, probably originating in southeastern Europe or Central Asia. It was dispersed widely throughout Europe and northern Asia, by humans as a source of blue, as well as through its own deep and fast-growing root system, abundant seed yield, and lack of appeal to grazing livestock. Brought to California and Utah around 1900, probably mixed in with a shipment of Irish alfalfa seed, woad is officially an in-vasive species throughout the American West. Found in forty-four of the lower forty-eight states, it may be poetic justice that “weed” and “woad” sound so much alike.

THE WAYS OF WOAD

The process of turning woad into blue dye is not simple. In the plant’s first year, when sown early and harvested during intense summer heat and sunlight, its leaves yield the most color. They are chopped and then milled into a paste, which traditionally is shaped into little balls and set in a dry place to cure thoroughly. When a dyer begins to prepare for a coloring session, the balls are crushed into a fine power, dampened, and left for a few days to compost. Add hot water and stale urine (or potash) and the vat is finally ready for thoroughly dampened cloth. As with vats of Indigofera tinctoria, cloth emerges a shade of yellowish green and oxidizes into blue. The blue color deepens with repeated dips in the vat.

But let’s go back to the phrase “stale urine” for a moment. Its ammonia helps break down a colorless substance found in woad leaves (and in the leaves of indigo and a handful of other plants) called indican, and converts it into indoxyl, which binds to the fiber in the dyeing process. In the old days, the urine was sometimes collected in buckets set out near taverns and left to age. The smell was predictably terrible. Because of the stench, Queen Elizabeth I, in 1585, put constraints on how close dye-houses could be to her residences.

By that time, importing woad from France and Germany had become so expensive that English farmers and dyers, seizing an opportunity to cash in, had been planting the crop in such abundance that it threatened essential food production. In response, the queen limited the amount of land in her realm that could be devoted to growing woad. Fifteen years later, Elizabeth rescind-ed these laws when indigo pigment traded from the East began to make inroads into woad’s economic importance. Indigo contained twenty to thirty times more colorant, and it was easier to work with. When synthetic dyes arrived in the nineteenth century to challenge mighty indigo, woad had mostly fallen out of cultivation. Some sources say that its survival as a dyestuff was due solely to its use as a “starter” for indigo fermentation,1 though that seems a bit of an oversimplification, especially since the last woad mill in England continued to supply dark blue cloth for police and military uniforms until 1932.

Even after being eclipsed by indigo and again by synthetic dyes, woad persists into the twenty-first century. Among medical researchers, it is valued as a source of glucobrassicin, a compound with potential in the fight against cancer.  Among crafters and policy makers in search of authenticity or sustainability, it is again of interest as a natural-dye plant suitable for northern climates.

Some people are growing woad at home. Norwich-based textile artist and teacher Aviva Leigh has a generous patch of woad just outside her studio. She harvests enough to support about three dye vats a year and often sends her students home with a seedling to start their very own dye gardens.

Though she often consults Tudor-era recipes from the early seventeenth century, Aviva’s modern-day exploration of woad does not involve stale urine. “Please emphasize that, if you don’t mind,” she requests. However, her experiments do bring slow cookers into play, along with a large mid-twentieth-century washing machine complete with mangle. Sometimes Aviva dyes existing clothes and home goods in need of a bit of a color refresh. And sometimes she dyes yarn and textiles for her artwork. “I must come across as a mad lady all in blue all the time. My ‘fashionable’ all-black wardrobe now sits unused.”

What fascinates her about this somewhat anachronistic dye plant? “There’s a softness in the blue. You can get really pale, delicate shades right up to some strong French Navy shades. Because it has much less indirubin, its colors are less red than Indigofera dyes. Treated properly at fairly low temperatures, woad can keep a certain green quality—a hint of turquoise that reminds you of sky and sea.

“When my students see how alive the colors that woad can make really are, they’re completely fascinated. They can’t believe that the green plants outside the door make these beautiful blues.” Indeed, student interest is palpable and keeps her motivated to continually refine and deepen her curriculum.

“Some people just love being together in the studio. On our ‘Weaving Wednesdays’ there’s a great sharing of work and inspiration and sometimes some helpful problem solving.” There’s also the camaraderie of “textilians,” whose love of fiber and natural dyestuff and technique are at the center of the conversation.

Woad has become integral to this exchange. As Aviva comments, “Poeple here in the UK are interested because of the history and heritage it represents, and because they can grow it in their gardens from seed. Woad just feels like it belongs here. “

From marigold temple offerings in India to cochineal in Oaxaca, Mexico, explore the rainbow of natural color in True Colors: World Masters of Natural Dyes and Pigments. 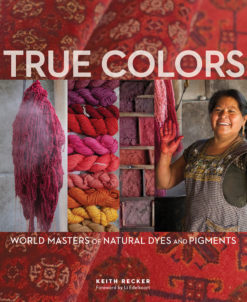 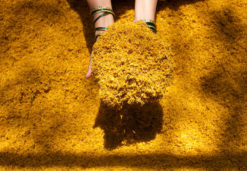