Around the world, especially here in the U.S., folks are donning sombreros and sipping margaritas in honor of Cinco de Mayo. While the world celebrates the 1862 victory of Mexico over French forces at the Battle of Puebla, oddly enough, it’s a little-celebrated event in Mexico itself. So on this fifth of May, we’ve decided to peek into some other, perhaps lesser known, celebrations in Mexico. All from the pages of Thrums Books. 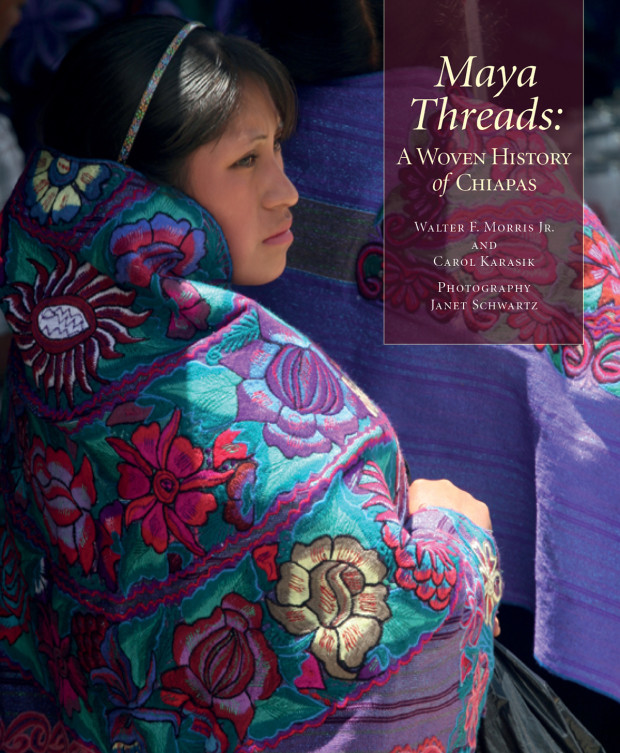 Chip Morris  devotes a chapter in Maya Threads to the origins of Maya ceremonial costume. He offers brilliant details of festivals, parades, and parties full of jaguars, spider monkeys, transvestites resplendent in huipils, feathered serpents, and a dozen more characters. About the costumes of the San Sebastián festival he writes:
The “Jaguars” wear an Aztec military uniform—the only example of cut and tailored cloth in pre-Columbian costume. The suit was also hand-painted. Though common in pre-Columbian times, painted cloth, along with hieroglyphic writing, was banned during the Conquest. (Tzib, the Maya word for writing, also means “to paint” or “to embroider.”)  . . . In the town of Suchiapa, the dancers still paint the cloth and wear the wooden jaguar mask as a helmet during the festival of Corpus Christi. 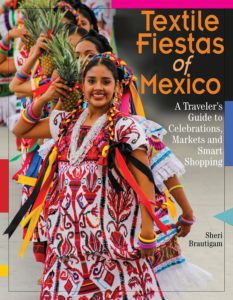 Textile Fiestas of Mexico: A Traveler’s Guide to Celebrations, Markets, and Smart Shopping

Sheri Brautigam details many fiestas in her handy guide to celebrating Mexico, but one of my favorites is the Feria del Huipi y el Café (Huipil and Coffee Fair) in Cuetzlan, Puebla:
This is a fair celebrating the main economy of the area, coffee cultivation, and the local traditional Nahuatl culture. Young girls from neighboring districts compete for the title of Reina de Huipil (Queen of the Huipil). Contestants dress in the traditional traje of the region and make short presentations in both Nahuatl, the regional indigenous language, and Spanish describing aspects of their culture. They are graded for poise, command of the two languages, and, of course, the quality of their traje. 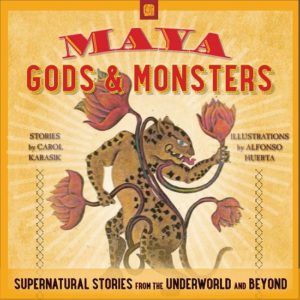 Maya Gods & Monsters: Supernatural Stories from the Underworld & Beyond

And perhaps Carol Karasik describes the best partiers of all in her retelling of the Maya story “Waterlily Jaguar”:

When Water Lily Jaguar prances, the eyeballs on his necklace jangle, the bells clang on his tail. When Water Lily Jaguar dances, water lily petals sweeten the air as he spins. His coat of stars is sending out sparks, his golden fur is flashing rays of light.
Oh, he is really whirling now, and the Lords of Death are beating their turtle shell drums and pounding their feet. They’re shuffling and stumbling and tottering in circles, banging and crashing and crunching each other’s toes. The kings are wearing their high-backed sandals and stomping on the stones . . .
The dance floor is thundering with hoof beats and claws. The air is reeling with glass wings, dog stinks, and buzzing antennae. Things get out of hand when Water Lily Jaguar dances, and the dead start jumping for joy.

It would seem that nearly every day in Mexico is cause for celebration–or at least fancy dress, exuberant headgear, and dancing!

Learn more about the beautiful textile traditions of Mexico from these Thrums Books available worldwide at ClothRoads, Amazon, and at your favorite indie bookstore.

One thought on “Not a Cinco de Mayo Celebration”