Semana Santa, Holy Week, the week before Easter, is a time of amazement and passion in Latin America. I’ve had the good fortune to be in Chiapas for this special time once, and in Guatemala twice. The memories are vivid and indelible.

It’s early morning before dawn, and a throng of people stream down the street outside our hotel. Scores of women in their characteristic huipils, each with a lace veil and a folded handwoven shawl on her head, are following the priest riding on a white ass.

An effigy of Mary Magdalene, wearing layer upon layer of handwoven huipils, is carried through the streets and around the square three times, having made a long journey from her home in Magdalenas. Clouds of incense and a brass band accompany her.

Heavy wooden platforms bearing statues of Jesus, Mary, and various saints are carried through the crowded streets. Onlookers weep with the emotion of the occasion. And so do I, a nonbeliever.

This small community of exiles from Tenango consists of not much more than a bright blue church and a few scattered homes. As we wander up the road to see what we can see, we hear a band, a tiny one with just a trumpet, a tuba, a drum and a couple of guitars, marching toward the church carrying a small effigy of St. Nicolas. A crowd of people follows the band, and ice cream vendors ply their wares as people jostle to enter the church. Where could they all have come from? We are miles and miles from any town.

On the road to visit Catarina Amperez Siana, an ancient and delightful old cotton spinner, we’re stopped by a procession of men dressed as Roman centurions with whips and swords.  They seem to have traveled a long way, and to have a long way to go. We don’t know why.

We come to an ancient stone church sitting out in the middle of nowhere. Men and boys dressed as 18th century French soldiers, but with the addition of pointed fur hats, fake beards, and Zapatista-style face masks tread around in a circle, marching to a dolorous monotone music for what seems like hours – after which they set fire to the field and proceed to run through the flames repeatedly.

Oh, there are so many more images, expressions of faith and tradition and community, blending Roman Catholicism and ancient Maya ritual – a live rooster crowing three times in the cathedral; hundreds of candles, thousands of flowers, ritual dances that hark back to the Aztecs. Pope Francis recently visited Chiapas, and while there, he conducted mass using the three most prevalent Mayan languages of that area: Tzotzil, Tzeltal, and Chol. He wore a vestment embroidered in the lavishly floral style of Zinacantan. It was a graceful gesture that acknowledged the cultural blending and persistence of tradition that characterizes these parts of the world. I’ll think of all this as I wander the aisles of my local supermarket, stuffed with chocolate eggs and Peeps and fuzzy bunnies.

Learn more about the beautiful rituals and the textiles of Semana Santa from these Thrums Books: 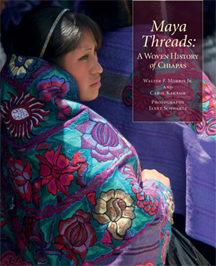