Enjoy this beautiful post from our weaving friend Aaron Burmeister.

I imagine you’ve heard or read about the Slow Fiber movement. Fiber enthusiast that you are, you’re likely even directly involved in some Slow Fiber cause. It and its similarly concerned older cousins, Slow Money and Slow Food, advocate for a different way of thinking and living, where “good” is measured qualitatively rather than quantitatively.  “Slow” living subverts the status quo of our privileged consumption. It swaps out ease, convenience, and the accumulation of stuff for thoughtful commerce, sustainability, conservation of resources, and fair trade.

A small group of weavers in northeast Iowa know a lot about slow fiber. They started a slow fiber project before Slow Fiber was even a thing. In fact, it was 1978 when members of the Oneota Weavers Guild began their weaving relay, and the finish line is finally, after forty years, in sight.

Actually, the story begins even further back, around the middle of the nineteenth century. Starting at that time and continuing through the century’s second half, a wave of immigration was helping settle northeast Iowa. Farmers and lower-class “folk” from Norway and other European countries established farms, rural trades, churches, and heritage organizations. Small communities grew up around mills as centers of commerce. Some of the towns even boasted colleges and seminaries.

And to be even more precise, the story begins even further back. During this immigration wave, the area in and around the town of Decorah, Iowa received a large number of emigrants from Norway. Many came from farming backgrounds and brought with them tools and other utilitarian objects decorated in the styles and techniques of Norway’s nineteenth-century folk arts. Some even brought handwoven household articles such as coverlets, or Åklaer.

Åklaer were the standard bed coverings in rural Norwegian homes during a period spanning the 17th through 19th centuries. Most often woven in the home, an åklae was constructed out of a cotton warp (hemp or linen in earlier examples) and a thicker wool weft. The weft was either laid in like tapestry or thrown with a shuttle, then beaten sufficiently to conceal the warp.

Many åklaer and other folk art objects now reside in the collection of Vesterheim Norwegian-American Museum and Folk Arts School in Decorah. Together with a campus of settlement-era structures, these handmade articles engage visitors with immigration stories as told through compelling interpretive exhibits. The Folk Arts School has offered hands-on learning in many traditional handcrafts for over fifty years.

In the spring of 1978, Elsa Bjerck–an expert in traditional Norwegian woven coverlets–came from Norway to teach a class in “Åklevev” at Vesterheim Folk Arts School. Her presentation must have been inspiring. Soon after she left, a number of the students dressed an old loom on exhibit in the museum with a long warp on which they planned to demonstrate åklae weaving, using a particular historical style called rutevev. I wonder if, at the time, they thought the scale of their plan was ambitious. Could they have imagined that the final portion of warp wouldn’t get woven for forty years?

In the ensuing span, about a dozen women have participated in the project. They have sat at the loom, demonstrating the weaving art for thousands of museum visitors. They have answered questions, asked questions, and made friends for the museum and folk art school. They have interpreted history and culture, even while creating new folk art objects. The project has yielded four or five (Or is it five or six? No one knows for sure.) distinct pieces, each with its own particular design. Some completed pieces have been given away (one to the King of Norway) and others have been auctioned off.

And now, the warp is nearly exhausted. Soon, guild members will release the final piece from the old loom. Those knots that have secured the warp for forty years and which were tied with hopeful and creative thoughts about the future, having fully realized their purpose, will be undone.

The work of dressing a loom is an act of hope. It’s an affirmation of imagination. And it’s the manifestation of a commitment. So many things about our world, both global and local, have changed significantly in the last forty years. People who begin monumental collaborative projects now likely have different ideas about creativity and commitment than their counterparts did four decades ago. And those in the Oneota Weavers Guild who were there when this first relay was begun know that they’re likely not going to see the completion of another. They nurture a different kind of hope. But hope is still hope, whether it stems from belief in what’s possible with your own hands or with the hands of others. And imagination is universal. And good and worthwhile causes can still inspire commitment.

Here’s to another forty years! 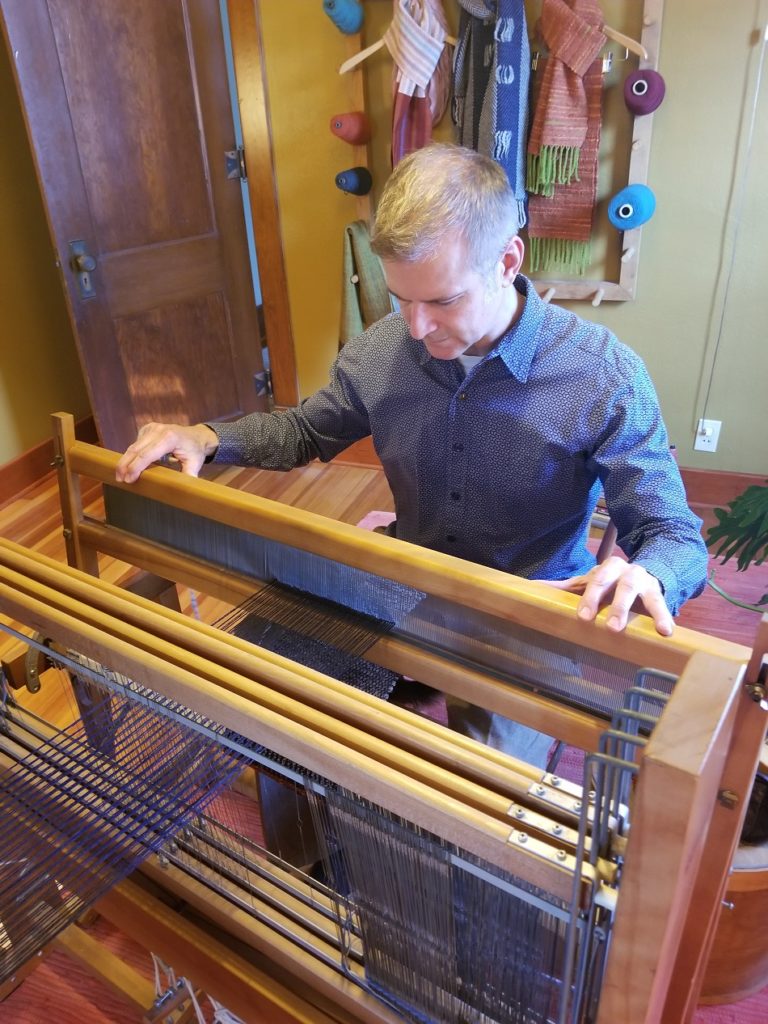 Aaron Burmeister recently began working for Vesterheim Norwegian-American Museum in Decorah, Iowa. He assists in most every aspect of the Folk Arts Education Program, from visioning its future to making coffee for students and everything in between. He’s also a weaver.

Discover more textile traditions in Thrums Books–telling the story of textiles and their makers from around the globe.

4 thoughts on “Slow Fiber and an Act of Hope”