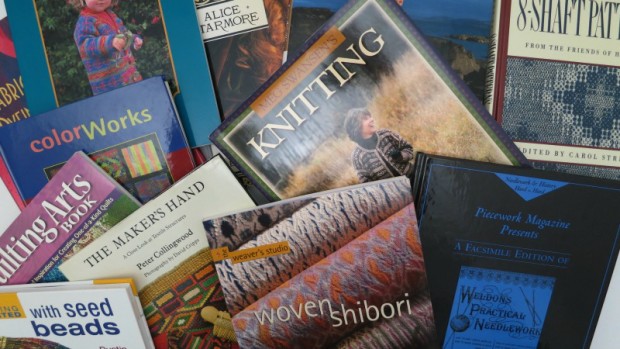 Thirty-five years ago, on a whim, I bought a splendid collection of weaving books for my young company, Interweave Press. It had belonged to a woman who had deep knowledge of textiles, but was moving into an airstream trailer to travel the land. The oldest book in the lot was a German edition of overshot patterns, engraved on delicious thick, creamy paper, dating to the late 1700s. There were textbooks on wool processing from the early industrial revolution. Oversized folios of ancient tapestries and carpets. Books of Eastern European folk costumes and motifs. A real treasure trove, where you could lose yourself for days.

Over the years, the collection grew into a real library, the Pourrey Cross Textile Library, with its own classification system and volunteer librarians. Other publishers sent us review copies of whatever they were bringing out each season, Interweave added its own books (which came to number several hundred titles), bereft husbands sent us their deceased wives’ workshop notes and samples dating back to the 1940s and 50s. When all was said and done, there were thousands of books. Thousands.

When I sold Interweave Press in 2005, my close colleagues and I kept possession of the library, though we left it in place for the editorial staff to use. Then the business was sold again, the company moved to a new location, and the building inevitably went up for sale. The library was boxed up and put in storage. It had no home.

It’s pretty easy to acquire books. You buy them, often for a pittance. People give them to you. They leap into your hands, you know not how. They just add up. Divesting yourself of books is not so easy. You form emotional attachments. You see groups of books that are as related as siblings who should not be torn asunder.

On the other hand, it seems wrong for books to be stuffed in boxes in a basement, of no use to anyone. So my ClothRoads colleagues and I are finally taking action. The most historically significant books have gone to the Avenir Museum at Colorado State University, where they will be well cared for and available for study. Many more books, and the archives of FiberArts magazine, have gone to the textile department at CSU. The Boulder Weavers Guild has taken collections of fabric swatches – boxes of them.

The rest? They are up for grabs, up for people who will give them a good home and use and enjoy them. Thrums Books and ClothRoads are hosting a sale on May 8 and 9 in Loveland, in hopes that at the end of the day, every book will have been adopted. Proceeds will go to furthering ClothRoads’ mission of supporting indigenous textile workers worldwide.

And that oldest weaving book? You’ll have to go to Germany to see it. It’s on loan to a lovely little textile museum in Gieselwerder established by Nora and Timur Kircher of the Kircher loom family.

2 thoughts on “The Story Behind the Interweave Library”