It’s an interesting word, Tinkuy. (Say tin-kooie). While it means a “coming together” in Quechua, it means more than that. It means (among other untranslatable things) coming together like rushing streams converging in foaming eddies to create a bigger river. There’s a lot of energy implied in the word. 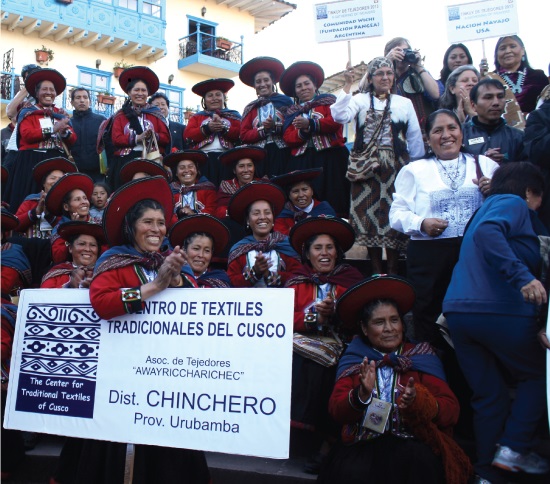 The first Tinkuy, in 2010, was a whirlwind of energy. The decision to hold the event was made in March amidst one of the most violent rainy seasons the Cusco District had experienced in many years. The railroad to Machu Picchu was washed out. Bridges were washed out. People perished. But the Center for Traditional Textiles of Cusco? They said, “Let’s do it!” And so they did, a scant seven months later. And it was splendid.

The event was held at a delightful conference center in the Sacred Valley. Never mind that the sunlight streaming in made the Powerpoints hard to see. Never mind that the buses bringing in weavers from far-flung villages had to negotiate narrow roads, tight turns, and traffic jams. What’s memorable is the sonorous, booming voice of the translator engaged to speak all the presentations in Quechua; the women from Guatemala challenging the men of Chahuaytire about gender roles; the hilarity of spinning contests pitting young against old, Quechua against gringa, and guess who won? Most memorable for me was the closing ceremony, when a group of elderly weavers took the stage and gave their looms to the children.

It was a massive effort, a huge success, and when it was over, Nilda Callañaupa, Director of CTTC, said, “Never again.”

But guess what happened next? An event that powerful, that filled with energy, can’t just die. Three years later, 2013, Tinkuy was back. This time it was in the up-to-date Cusco conference center right in the heart of the city, where the courtyard was filled with weavers from all over South America, from India, from Mexico, from Navajo Nation, demonstrating their craft and selling their goods. The auditorium was alive with tri-lingual presentations delivered via modern headsets. The breakout rooms were buzzing with workshops: how to create for the international market; how to do ancient Inca techniques. I will never forget the parade up Avenida del Sol and around the Plaza de Armas—hundreds of weavers in their finest dress, dancing their way to the Tinkuy.

Now we’re coming up on Tinkuy 2017. The CTTC staff has learned so much, developed such fine organizational skills, that they’re planning something bigger and better than ever. The keynote speeches and the group presentations will reflect a growing global awareness of the value of indigenous arts. Artisans from many nations will come to share. The theme, Past, Present, Future, will send its energy out into the world. Don’t you wish you could be there? You can! You can register right now, and get useful tips on traveling to Cusco. There are special early-bird rates until April 30.

And if you just can’t be there, you can do your part by making a contribution. Hosting a Tinkuy of the depth and quality that CTTC has come to be known for requires a lot of resources. Expenses include bringing weavers in from the villages, bringing international weavers and program speakers, paying for the conference facility, mounting an exhibit at the Machu Picchu Museum, compensating additional staff, and much more.  All donations of $100 or more will be recognized in the Tinkuy program. Go to Andean Textile Arts to make a donation by credit card or Paypal. You’ll find a spot on the donation page to designate that your donation is for Tinkuy 2017.

But still. Why don’t you just come on down? It could change your life.

Prepare for Tinkuy with these Thrums Books

Available at Amazon, ClothRoads, and at your favorite book shop