I bought these two little macramé bands in a thatched hut near the Maya ruins at Cobá, deep in the flat, dense jungle of the Yucatan peninsula of Mexico. This was more than twenty years ago, before friendship bracelets took the world by storm. In a wasteland of crude, redundant tourist goods, the fine craftsmanship of this little piece was compelling. It came from the state of Chiapas, I was told. Where it was made by the people. That’s all I could glean with my pathetic high school Spanish.

It didn’t seem that this knotted band, or the others like it that I saw in a market in Chetumal, came from a local tradition, though intricate macramé fringes can be found on handwoven shawls in southern Mexico and Guatemala. Not until I was working with Chip Morris on Maya Threads did I learn more. Chip first saw this kind of band being knotted by a pretty young Italian tourist in Chamula, Chiapas, around 1982. (In Italy, the technique is called cavandoli—tapestry knotting.) Apparently local artisans picked up the skill quickly and soon the bands, now called pulseras, were everywhere. They even began to show up appliquéd to the sleeves of huipils in lieu of traditional hand embroidery in the village of Pantelhó.

If you know the basic knots of macramé, you could easily replicate these pulseras, I thought. You’d just take ten strands of well-twisted cord each about two yards long—rayon, like this one, or cotton or silk. Five strands of each of black and white for a bold, graphic look, or mix it up with two strands each of five colors. Fold the bundle of strands in half, twist it a few times in the middle, and tie it to something reasonably fixed: a doorknob, table leg, your big toe (if you’re going to be sitting still for a while and you’re reasonably limber). From there on, it would just be a matter of time and double half-hitches. 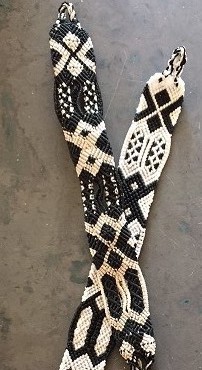 As you can see, these bracelets involved making lots and lots of them. A thousand, to be precise, for each one. I counted. If you could tie a double half-hitch every six seconds, you could make a bracelet like this in just over an hour and a half. Or so I thought as I studied it. When I tried, though, I found that the rayon was slippery, tension was hard to control, and at least a couple more hands would have been useful. Whatever man, woman, or child produced these small but intricate items deserves a lot of respect, and certainly more than the three or four pesos earned from them.

My children at one time or another had friendship bracelets that they wore until they, the bracelets, fell off in tatters. Some were made by actual friends, some were imported from places where braiding or knotting thread all day long provides subsistence. To make a thing like this for a friend would be a gift indeed. To make it for an appreciative but anonymous stranger to earn a bit of change is also a gift of sorts. Either way, it’s hand to hand.