Chiapas is a mystery and a land of contradictions.

Geographically, it ranges from the deep, sweaty Lacandon rainforest to the high, cold, encircling Sierra Madres. Spiritually, it’s traditional Roman Catholicism with holy mass one day, and chicken sacrifices in the corner of the church the next.

It’s European saints’ effigies dressed in layers of handwoven Maya huipils. It’s a decades-old civil war in which no shots are fired. It’s the shocking sacrifice of ancient Lady Xook drawing a rope of thorns through her tongue to the startling statement of Zapatista women today sewing their mouths shut to protest their lack of political voice. 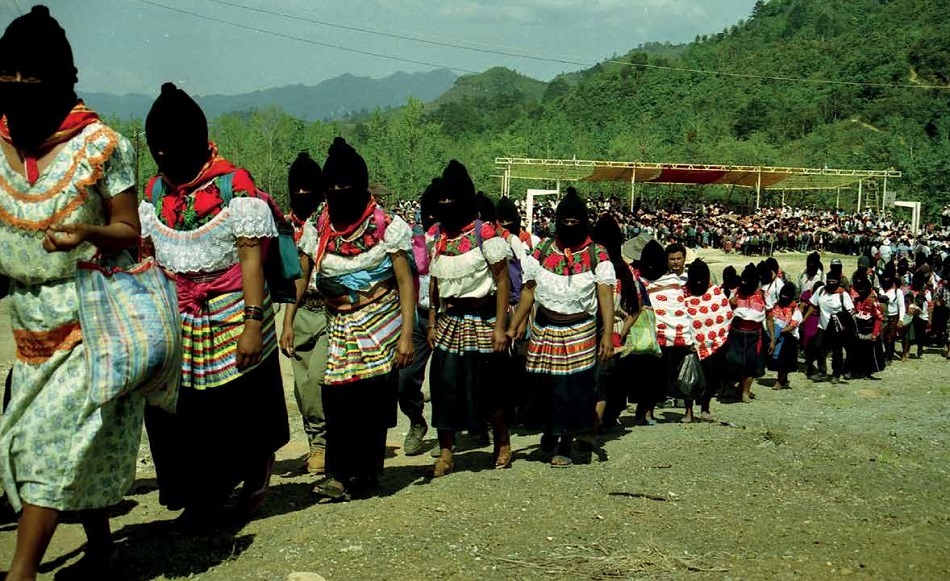 Everything new is very, very old.

Chip Morris understood Chiapas. Standing with his feet in two worlds, he became the ultimate interpreter and guide to these people, this culture, that he loved. Here’s an excerpt from his great final work, Maya Threads: A Woven History of Chiapas.

The Daughters of the Earthlord

The design of the Universe is woven with clarity and purpose, line by line into Maya cloth. The weaver maps the motion of the sun through the heavens and the Underworld, through time and space. With the repetition of the “universe” design, the lordly sun is prompted to continue his journey. A Maya woman weaves the cosmos as it awakens.

Below the design of the universe, the Earthlord and his musician, the toad, dance in the cotton weave. On the ﬂower design that covers the sleeves sits a scorpion, a creature that attracts rain. Through these characters the weaver has set the scene for a central drama. While the toad sings at the mouth of the Earthlord’s mountain cave, the Earthlord’s daughters prepare cotton, which will be transformed by a bolt of lightning into rain clouds. The scorpion is introduced into their midst to prick the lightning into action. The cotton huipil, perfectly animated, draws the powers that bring life-sustaining rain.

Each Maya woman weaves her own vision of the sacred universe and signs her works with a personal design. She also adds the special design that identiﬁes her community. But all ceremonial huipils portray the world as a diamond. The four sides of the diamond represent the boundaries of space and time; the smaller diamonds at each corner, the cardinal points. East is above, where the sun emerges. West is below, the end of the day. North is on the left, because for the Maya north is insigniﬁcant; in the tropical skies the sun passes directly overhead, angling only slightly toward the north or south in different seasons. At night the stars also move directly from east to west, undistorted by Polaris, which lies near the horizon.

When the sun rises and sets, it passes through the oceans, the Caribbean Sea in the east and the Paciﬁc to the west. These watery boundaries are represented in the universe design by indigo blue threads. Some say the sun boils and evaporates the seas to keep the waters from ﬂooding the earth again.

When the sun sets, it travels below the earth and becomes the Lord of the Night. Under the world, the night sun crosses the land of dwarfs, who wear thick mud hats to protect themselves from the sun’s unbearable heat.

In the universe design, the path of the sun across the sky is shown by a thin yellow line connecting the small diamonds of the east and west to a large central diamond. This inner diamond has curls on each side that represent wings; called pepen, “butterﬂy,” it is the weavers’ symbol for the day sun. The butterﬂy is a metaphor for the sun because, like the sun, it inhabits the Underworld when day turns into night. Butterﬂies as well as fruit bats dwell in caves—portals to the Underworld—and feed on the same ﬂowers. In the waning light of dusk, you may see a butterﬂy ﬂuttering among the bushes at the edge of the cornﬁelds and then suddenly see a bat ﬂying away from the same spot.

The sun is personiﬁed as Our Lord, Jesus Christ; the moon is Our Holy Mother, the Virgin Mary; and the stars are the glowing crowns of the saints. The sun, the moon, and the stars follow a path across thirteen layers of sky and nine layers of night. Storytellers say the sun crosses the sky the way a man climbs a roof. Each hour it reaches another level, until it arrives at the peak at noon. There it pauses for a moment before descending across the other side of the sky.

The universe design shows the sun at noon, resting in the center of its daily journey. To represent the sun in motion, huipils repeat row after row of diamonds, with small variations. In huipils from the community of Magdalenas, the ninth and thirteenth row are marked with a dark line or a change of color to indicate the division between the Underworld and the sky. Since the layers can be described as hours, the movement through space is also movement through time. The repetitions of the universe design show the sun’s daily and yearly motion.

The yearly cycle can be represented in two ways. Some weavers in Magdalenas make color changes on the eighteenth, twentieth, nineteenth, and ﬁfth rows to mark the eighteen months of twenty days and the nineteenth month of ﬁve days that comprise the Maya solar calendar. Weavers in San Andrés illustrate the solstice by placing a bright yellow spot along the side of the path of the sun—at the tip of the wing of the butterﬂy—to signify the shift in the sun’s journey. Each row of diamonds will have a bright spot, ﬁrst on one side, then on the other side of the sun’s path, to show winter and summer solstice.

When a Maya woman puts on her huipil, she emerges, symbolically, in the axis of the world. The designs of the universe radiate around her head, extending over the sleeves and bodice of the huipil to form an open cross with the woman in the middle. Here the supernatural and the ordinary meet. Here, in the very center of a world woven from dreams and myths, she stands between heaven and the Underworld.

Learn more about the Maya Universe in Maya Threads: A Woven History of Chiapas.